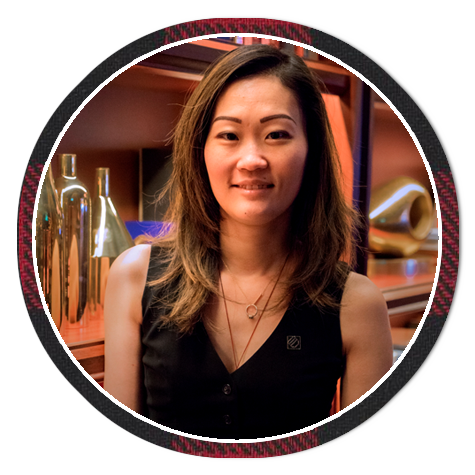 Juyoung Kang comes to her position with considerable experience and acclaim. Some of her most recent recognitions include “Bartender of the Year 2015” from the Nevada Restaurant Association and Desert Companions, her regional wins for GQ and Bombay Sapphire’s “Most Imaginative Bartender” 2014; Liquor.com and Woodford Reserve’s “Manhattan Experience” 2014; United States Bartenders Guild and Nightclub and Bar’s “Shake It Up” 2015 and second place winner for 2016; and Bacardi Legacy 2014.  She is also part of the Tales of the Cocktails’ Cocktail Apprentice Program (CAP) where they volunteer to help put on a weeklong event for industry professionals, media and consumers on the education of all things cocktail every mid July down in New Orleans, LA.

A Philadelphia native, Kang started out bartending in her hometown and shortly made her way to Los Angeles where she worked at the Peninsula and Thompson Beverly Hills Hotels. Soon after, Kang moved to Las Vegas where she tended bar at Comme Ca.  Kang opened the popular downtown Las Vegas bars Park on Fremont and Commonwealth, including Commonwealth’s widely praised speakeasy, “The Laundry Room,” awarded “Best Nightclub with the Best Mixologists” by the Las Vegas Review-Journal.  Most recently, Kang has worked with the Cosmopolitan of Las Vegas’ unique supper club Rose.Rabbit.Lie., BLVD Cocktail Company at The LINQ and Emeril Lagasse’s Delmonico Steakhouse.